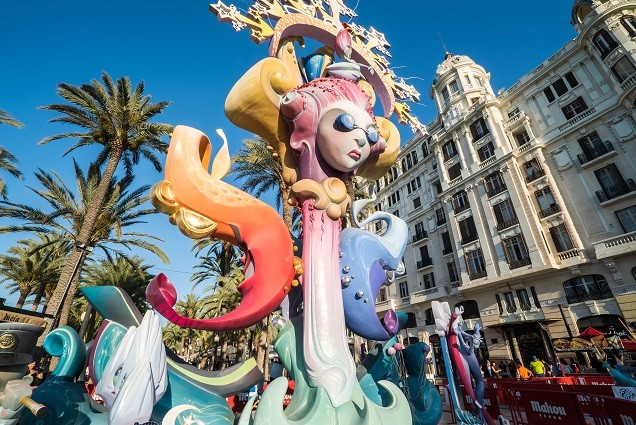 Great city on the coast of Costa Blanca

Alicante is a city in Spain on the Costa Blanca, the capital of the province of Alicante and the comarca of Alacantí, located in the south of the Valencian Community. It is also a historic Mediter-ranean port. The population of the city of Alicante is 350.000 people. This is the second-largest Valencian city. Eighth largest metropolitan city of Spain. Place of Hogueras de San Juan

There is always a time for celebration

The Spaniards are a nation that likes to celebrate everything and everywhere. If there any chance to celebrate, we need to use it. Today, I would like to present one of the most important days that we celebrate in Alicante.
The most important holiday for the Spaniard in Alicante is Hogueras de San Juan. On this day to be more precisely 23rd of June, we welcome summer again. Exactly on midnight many campfires start burning on the most famous beach in Alicante – Playa de Postiguet. Everyone is dancing around the flames and swimming in sea. This night is called Noche de San Juan. (Is very similar to polish tradition or Las Fallas de Valencia in March).
Lighting fires on the shore had symbolic power. According beliefs, the power of flames will chase away bad spirits which can destroy the agricultural crops.

A little bit of history

Bonfires of San Juan was started by farmers from the Alicante. They were celebrating the longest day of summer. This custom spread to other areas, but the authorities forbade this type of celebrations. However, the rural areas were faithful its own tradition. It was 1881, when the authorities forgot about the announcement an annual ban of celebration. And people start organizing “Fiestas de calle”. The events were accompanied by popular games, music and ancestors of grotesque puppets. Seeing a positive atmosphere, the authorities withdrew out of earlier ban, considering that it was resulted from a mistake of understanding the folk culture of this region.
Officially feast day was established in 1928 and get name: Hogueras de San Juan. The precursor of organizing this celebration on a larger scale was Jose Maria Py who said: “Hogueras for centuries are a well-known tradition, which we as
citizens of Alicante should impart a similar character as people of Valencia did with respect to their Fallas”.

Over the years, the celebrations gained new traditions available in Alicante. Today is not just burning bonfires on the beach.
Real preparations begin a month before. Need to be chosen Bellea del Foc (queen of the Hogueras), one child Queen of girls living in Alicante and six bridesmaids. During Hogueras de San Juan, they lead to all parades and they are dressed in folk beautiful costumes.

Celebration takes a few days and it starts at 19 June and lasts until 24 June.
Among the most interesting, representative events can be men-tioned: firework shows called Masclet on Plaza de los Luceros, parade “Desfile de Entrada de Bandas” with orchestras, sacrifice made of flowers for the patron of Alicante (Virgen del Remedio)
One of the most important points of Hogueras are huge dolls (Hogueras) made of cardboard and wood, which they are a form of satirical commentary for present socio-political events.

Visually, they are so much detailed like real art. But unfortunately, their lives are short – During Noche de San Juan are spec-tacularly burned, which is one of the most attractive view during whole holidays. On all streets you will hear loud music and see celebrating people until the morning

Have you ever participated in such madness? ?? Just try! 🙂

Join to us during this amazing week and spend your holidays in of our over 100 apartments located in the center of Alicante.

This website uses cookies to improve your experience while you navigate through the website. Out of these, the cookies that are categorized as necessary are stored on your browser as they are essential for the working of basic functionalities of the website. We also use third-party cookies that help us analyze and understand how you use this website. These cookies will be stored in your browser only with your consent. You also have the option to opt-out of these cookies. But opting out of some of these cookies may affect your browsing experience.
Necessary Always Enabled
Necessary cookies are absolutely essential for the website to function properly. This category only includes cookies that ensures basic functionalities and security features of the website. These cookies do not store any personal information.
Non-necessary
Any cookies that may not be particularly necessary for the website to function and is used specifically to collect user personal data via analytics, ads, other embedded contents are termed as non-necessary cookies. It is mandatory to procure user consent prior to running these cookies on your website.
SAVE & ACCEPT